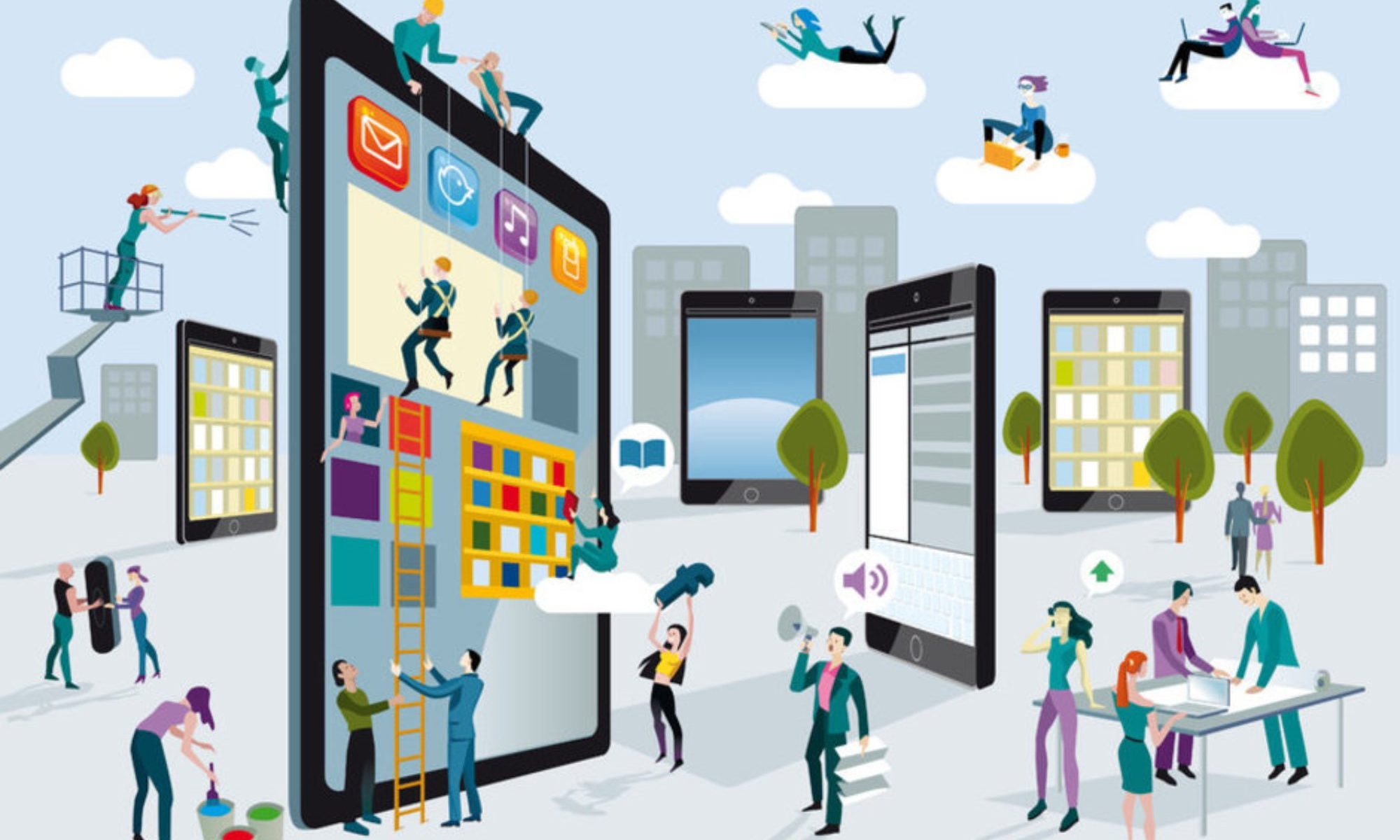 While everyone looks to the horizon for the next big bubble, There’s a monumental divide that is forming within the PC, mobile and companion verticals. At first, it started small…like a fracture on the side of a mountain; but it’s continued to spread. It deepens month-by-month. Most recently, I’ve noticed this chasm expand to completely break certain products onto their own island. Like the moving tectonic plates of Earth, the technology world is shifting underneath our feet…

Memories of the past…

No one can argue that from the 1980’s till 2003ish, desktop / laptop computers dominated technology workflow. What I mean by this is if you were using technology, working on technology or communicating via the Internet, you dominantly used a desktop or laptop computer running a traditional OS (Windows or MacOS).

Everything sprouted from your use of the computer. Palm Pilots, Blackberry’s, iPods… everything else…just an extension of your desktop “life”. Then in 2007-2009 the smartphone was born. No one can argue that the original iPhone began a revolution in the mobile space that birthed everything from Android to tablets to connected “companion” devices. All of a sudden, you could do real things away from the computer.

The cloud is born…

How do sync your workflow from desktops, to laptops, to tablets and smartphones? The Internet of course! Around 2011 Google, Apple and Microsoft all coin their versions of “cloud” storage services. They sync files from your computer. They make files accessible via your smartphone. They allow you to push your digital-life onto the Internet and avoid having to crack out your laptop every time you need to do something.

We started small. Email, a few pictures, maybe a quick glance at a PDF; but year after year devices became more capable. In recent years it’s not uncommon to hear people say they prefer answering emails on their mobile devices. It’s also not uncommon to see “real” work happen on tablets, convertibles or cross-platform devices. We’ve seen a serge in BYOD policies emerge at companies, as well as the purchase of iPads for entire employee workforces. The laptop is no longer a defacto standard…

Behold, the re-birth of software!

Operating systems aside, almost all computer software from 1970 – 2007 was developed for the desktop computer. Having a 37 year head start is no small detail. Word processors, web-browsers, email clients, photo editors, audio players, file management platforms…all birthed, matured and tested on desktop-based Operating Systems. It’s no wonder that a laptop feels like the ultimate productivity machine. Just like the salt and pepper silver fox in your office; the traditional computer is over 40 years old, with real-world experience, and a backup plan if all else fails.

The Internet gave birth to websites, content management systems and communication platforms. But these teenaged hoodlums had no real devices requiring them to perform. For years web-based software was banished to the likes of marketeers, home shopping and social networks. Windows and MacOS were there to save the day when the Internet just “wouldn’t cut it”.

Smartphones and tablets were the final nail. Not only did they have their own OS and “apps”, but they needed mature web-based technologies. Mobile applications are just turning 11. While helpful, they can’t hold a candle to the 40 year veteran of business and commerce…the computer. When coupled to teenaged web technologies…they create something fun and enjoyable. Something that actually works! Sometimes, they’re even easier than their desktop counterpart. Software is changing.

It’s now a serious consideration on whether to develop as mobile, web-based or desktop-based. Some platforms only exist on mobile, while others have completely gone web-based. Right under your feet the landscape has changed to things like Salesforce, Office365 and Creative Cloud. Before your eyes, a rebirth has occurred, pushing your favorite software to multiple devices.

Every major shift in computerized technology has stemmed from innovation within the hardware space. Power-optimized processors, battery tech, display miniaturization and wireless radios. As new hardware is produced by science, new platforms are released. Apple Watch. Chromebooks. Smartphones. Connected TV. Every aperture exists due to it’s past, it’s science and it’s ability to deliver a better user experience. Portability, longevity, and connectivity; all experiences that are improved by the ever-changing hardware vertical.

As hurtful as it is to say, hardware alone is nothing. Software alone is also nothing. Each side of the coin requires the other to exist. Excellent software on crippled hardware is unusable. Excellent hardware with lacking software is useless. Innovation must occur in both spaces, at the same time to make platforms viable in the marketplace. Realistically this doesn’t always happen.

We’ve had miniaturized displays for over a decade, and only now are able to push usefulsoftware onto them to produce things like the modern smartphone. We’ve had fantastic advances in processors that required better battery tech and software to birth things like the Apple Watch. The technologies we’ve invented over the last 20 years are finally coming together to produce a whole new era of machines that will wildly change the desktop-dominated market.

The Future is Now!

Technology aficionados and the middle-aged worker have two things in common. One, they’ve been around a while. Two, they probably don’t need mom and dad to buy stuff. If you’re between 30 and 65 you’ve probably had to use a computer for something. Whether you like it or not, you’ve got experience with desktops and laptops. You’re use to the experience and maybe you’ve enjoyed tooling around. If you’re knowledgable with technology you’ve had to use it; and to use it you’ve had to pay for it. If you have money to pay, you’re probably older than 18. The fact is, kid’s aren’t better with tech. They’re just less experienced and bias towards older tech. I myself fit into this category. I grew up on a desktop computer. I prefer the mouse, the keyboard and the large display. I know how easy desktop software can be, and I know how to use the computer to do amazing things.

Budding technologies like the smartphone, and cloud-based Chromebook are cool. They do amazing things. But like a child making a decision between a handsaw and circular saw; mature folks are bias towards productivity. They know that the laptop is the smarter choice…for now.

The fact is, you can build a house with a handsaw. And if that’s all you know, you’ll do an amazing job at it. Teenagers and 20-something’s know mobile. They can put amazing things together on iOS and web-tech. OEM’s know this. Apple isn’t targeting the retiree. It’s a good story to tell, but the reality is they need to hook the 20-something so they get the next 40 years of revenue. The focus is on mobile. The focus is on web. All the issues with desktop software, laptop computers and mature technologies are set. They aren’t going to change drastically. Just like the train, they’ll get better…but they’re not going to make a quantum leap forward. Mobile and web are. They’re coming out guns-a-blazing and are ready for the next 40 years. Sans issues. Sans expectations. It’s a blank canvas with a more mature artist.

You are! The divide is in the workflow. The way you use technology is dividing the marketplace.

Think about the home phone. I can guarantee your grandparents use it exclusively. I’m pretty sure your parents use it sporadically. I’d be willing to bet you don’t even know where the landline is in your house. The home phone is fully divided. It’s slowly dying and will truly cease to exist within 2 generations.

The computer is next. We are the first generation that is bound to keyboards, desktop OS’s and port-filled laptops. The generation behind us is figuring out ways to use Chromebooks and convertibles. They touch the screens and live with Onedrive. The generation behind that knows nothing of DOS. They know nothing of the mouse. Google and Apple see this divide…they know the differences in workflow. As they aligned their business for the next 40 years, they’ll ensure to include the laptop. They won’t leave us in the lurch.

That said, new technologies are going to be focused on other things. No ports means less compatibility. Online software means less piracy. Mobile “apps” means less local coding. It’s all about efficiency. Less effort, less struggle, more universal. These new platforms are an amazing look at what’s to come over the next decade. I’m fully ready to accept that I’ll know how to do things on the computer far faster than on Android. I’m also ready to accept that not everything will be possible from a Chromebook. That said…I’m not going to resist the shift. Just like accepting my home phone is now strapped to my belt, I’m excited to see how these shifts will positively impact my life.